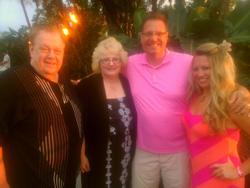 In 2013, Keith Noll was inducted into the AAU Hall of Fame.

In addition, Keith Noll also serves as the National Chairman for AAU Inline Hockey and NFL Flag Football programs and is the Founder/Director of the Great Lakes Shootout Series Basketball Tournaments.

Keith and his wife, Lydia have been married over 40 years and they have two grown children, Mark and Natalie, and three grandchildren, Jackson, Tyler, and Keaton.

Lydia Noll has been an instrumental part of the Viking Club/Team Wisconsin program and the Great Lakes Shootout Series basketball tournaments since 1987. Lydia has served as the Secretary, Treasurer and Registration Chair for Wisconsin AAU. Some of the awards that Lydia has been honored with include the District Volunteer of the year award, and the AAU Volunteer of the Decade Award, and National Registration Chair of the Year Award.

As Program Director, she is responsible for the day to day operations of the club, oversees the website, developing the programs and scheduling of the teams, marketing, and communications with coaches, athletes and parents.

Kara is a graduate of University of Wisconsin-La Crosse, where she was a member of the track and field, cross country and women's basketball teams.

Kara and her husband, Mark, have two children, Jackson (18) and Tyler (16), who are both very active on basketball and track teams.  They both play for Cuba City High School.

Mark has over 25 years of coaching experience at all levels including collegiate, AAU and youth levels.  Mark is currently the Head Women's Basketball Coach at the University of Dubuque, where he is the school's all-time winningest coach.  Mark had led UD to their most successful seasons in school history.

Mark coaches with Team Wisconsin Select teams and is a coach advisor for the program.

Natalie Noll Secraw: Keith and Lydia's daughter, Natalie was the 1st girls AAU athlete in the clubs history when Keith began the original Wisconsin Viking Club. She can be seen at almost every tournament helping out wherever she is needed and remains a huge supporter of the Team Wisconsin and Viking Club program.